Trending
NFTs, what are they? Discover its applications
Discovering the Metaverse potential
Physical Internet: Integrated technologies towards universal logistics.
Humanitarian logistics: At the heart of every emergency
Voice technology. Changes and keys in digital interaction.
The importance of cybersecurity as the backbone of...
Fog Computing for efficient and reliable digitization
Sustainability, Security and Technology: 3 key areas for...
Artificial Intelligence and Machine Learning in Manufacturing
Smart Tourism. Smart travel experiences
Home Tecnología Technologies that will be developed in 2018
Tecnología

Technologies that will be developed in 2018

We could say that the past 2017 has been a bittersweet year for the technology industry. This is because throughout the year we saw new and great devices that came to the market, some predictable technological advances and also important failures. But that is the past, already immersed in 2018 the question is, what will bring us the new year and in which technology? 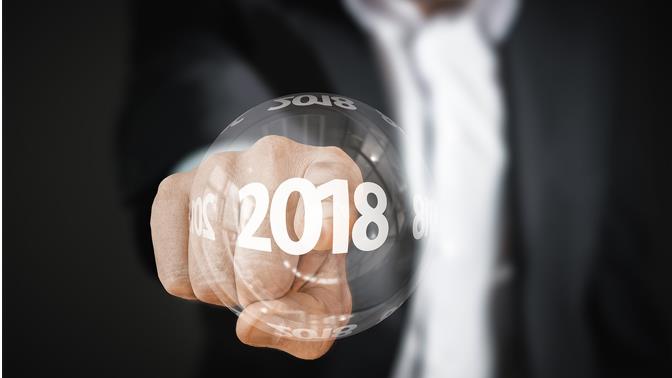 These are some technologies that will be developed in 2018.

It came on stepping hard and many assumed that virtual reality was going to take over the world. However, the fact of clutching some handsome glasses in the head to watch videos in 360 or video games, was not exactly what most expected of this technology.

But let’s not take it as a failure, it seems that virtual reality was only studying the best way to become a hole in our lives. And there are many chances that we will see it integrated into our mobile phones soon.

A good example of this is Apple’s ARKit, a software development kit for developers, which allows augmented reality applications for the iPhone and iPad. ARKit applications put three-dimensional images in our world through the so-called inertial visual odometer, which takes advantage of the sensors of our device to track our world and perceive the orientation and position of our device in relation to the scene what are we seeing. The applications are endless, from seeing the effect that you can have new furniture in your room, to telling fantastic stories to our children with unreal characters that move around our house.

As you can see, a fantastic world where fiction and reality is being mixed. And that is just the beginning …

THE ADVANCE OF BLOCKCHAIN

We talked about Blockchain in the previous article and, of course, it could not be left out of this list.

It was born as the base technology of Bitcoin, then it began to be used with other digital currencies, but as I explained in the previous article, its use will go much further, using it for any type of transaction. This could cause Blockchain to mark the history of technology in the coming years, maybe decades.

In the world of digital currencies or cryptocurrencies, an instrument is known as ICO (Initial Coin Offering) to finance the development of new protocols. This ICO process is complemented by the use of what are known as smart contracts (Smart Contracts) and gives us the possibility of financing any business project. 2017 was definitely a record year for the ICO: an equivalent, in fiduciary money, has been raised to about 4 billion dollars. It’s only 2% of the total money raised by traditional IPOs (Initial Public Offering), but it’s all about starting. It’s not bad at all!

Although it is in an initial phase, 2018 is a promising year in which we could begin to see blockchain-based applications for: the execution of intelligent autoexecutable contracts and complemented by automatic learning; identity managements; votes and referendums; supply chain through the Internet of Things (IoT), mainly through IOTA; gaming platforms; etc. IOTA allows companies to explore new B2B business models, making each technological resource a potential service that is negotiated in an open market in real time, without commissions.

In summary, the explosion of the innumerable applications of Blockchain technology begins.

THE DEFINITIVE ARRIVAL OF 5G

A few months ago I was talking about 5G as the future of wireless networks. I invite you to read the article, explaining exactly what 5G is, how fast it will be and some incredible things that will allow us to do …

In this article I was talking about a global availability forecast of 5G by 2020. Well, it seems that the date is not far from reality, because throughout 2018, the fifth generation of mobile telephony will begin to replace to its predecessor 4G-LTE.

AT & T Company is already working to become the first American company to introduce 5G mobile network service in 12 cities in the United States.

And in case there is some doubt that 2018 will be decisive for 5G, South Korea implements a pilot test during the Winter Olympics in Pyeongchang and intends to launch the first 5G trade network in 2019.

ROBOTS “WILL TAKE THE STREETS”

Many companies have spent a lot of time investing resources and efforts in the development of robots. And it seems that in 2018 we will begin to see them in the streets. For the first time robots leave the “controlled” environment they have in factories to participate in service processes where they interact with us in the same space. This is possible, due to the technological evolution they have had.

In this way, we will see robots with built-in cameras, sensors and GPS that will make life easier for us. Everything points to this year that we will begin to see them in hotels, airports, medical centers, etc.

The TUG robot, for example, is designed to bring medical material to nurses and perform other tasks that allow healthcare personnel to focus on the really important, the patients.

Although so far smartwatches offer notifications from our Smartphone, in addition to calculating basic health data, the great plan of smartwatches is to become medical devices that can save our lives .

It is possible that the recent initiative of the American FDA through which it invites several manufacturers, including Apple, Samsung and Fitbit to join a pilot program to accelerate the development of certificates for digital health devices as they can serve to transform the market, we could see advances throughout this 2018 and obtain finally that they can be considered medical devices.

Truth is that the issue of autonomous vehicles has been going on for a long time. So much so that autonomous cars are no longer an extraordinary thing or that it surprises anyone.

In fact, over the past year some companies have already begun to implement this type of vehicle in their fleets …

It’s not a totally new technology, but it will continue to evolve and normalize throughout 2018. A good example is the case of Waymo, who has already announced that he will launch his first completely autonomous taxi this year.

The technology is ready, now we will have to solve the legal problems. It will not be easy, each country is different, since the problem of liability and insurance is not treated in the same way. It will be a difficult obstacle to solve because there are many interests behind, despite knowing that more than 90% of road accidents are caused by human causes.

INTELLIGENT HOUSES THAT OPEN THE DOOR TO STRANGERS

That we are not at home is not a reason to not be able to receive a package or that the delivery guy leaves dinner at home before we arrive.

The Amazon giant, last year, launched a service that allows the delivery service to access homes through a special intelligent lock. From its own website, it sells the special lock and the camera that guarantees a certain security and shows each movement of the delivery guy.

Of course, the Amazon camera, as well as a security system, will allow the company to know your habits, your tastes and even the brand of milk that you consume. Maybe we will have to think twice before installing or covering it when it does not interest us to be spied on!

And these are just some of the technologies that will be developed in this year that begins. As you can see, to change, we are waiting for an exciting year in which technological advances are concerned.

The impact of Blockchain on logistics