Trending
NFTs, what are they? Discover its applications
Discovering the Metaverse potential
Physical Internet: Integrated technologies towards universal logistics.
Humanitarian logistics: At the heart of every emergency
Voice technology. Changes and keys in digital interaction.
The importance of cybersecurity as the backbone of...
Fog Computing for efficient and reliable digitization
Sustainability, Security and Technology: 3 key areas for...
Artificial Intelligence and Machine Learning in Manufacturing
Smart Tourism. Smart travel experiences
Home Logistica Technologies that will make roads safer, more comfortable and efficient
LogisticaTecnología

Technologies that will make roads safer, more comfortable and efficient 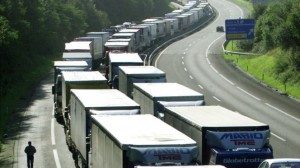 Technology has advanced at a breakneck pace bringing major changes in nearly all industries. However, if we talk about transportation, or roads in particular, these advances have not been much noticeable, which means that, despite some exceptions, our roads today are very similar to the roads we travelled a decade ago. Although they occupy vast extensions, virtually anywhere in the world, roads and motorways have an untapped potential.

But the fact that they have not been applied or implemented does not mean that there is no research and development of technologies designed to make safer, more efficient and comfortable roads. In fact, there are many projects, some completed and many others under development, which open up a world of possibilities and allow us to figure out what the roads we will be travelling in the near future will be like.

In this regard, there are plenty of projects, initiatives and prototypes…

In Holland, for example, a trial project has been carried out to turn roads into energy generating surfaces. The idea is to replace conventional asphalt roads with a new compound that is able, among other things, to capture solar energy and convert it into electricity. Solar panels are covered with highly resistant materials. This makes it viable for cars to drive on them while capturing the energy of the sun. Beyond the environmental concerns, this option may turn out to be more profitable. It is estimated that these roads would have a lifespan of 20 years and that it would take us 15 years to repay them through the energy generated. This can be achieved once the testing phase has been completed and mass production can be performed.

Other projects also propose solutions to use the day solar energy to supply the lamps that illuminate the road at night.

Some go further and have created systems with sensors which, when applied to lamps, make them light up only when they detect the presence of a vehicle. Thus, a great amount of energy can be saved, using it only when really necessary because there are users on the road.

But not only sunlight can be used to generate energy on the roads. An Israeli company has created a system based on a compost of crystals which, embedded in the asphalt, are able to generate energy through the pressure exercised by the vehicles circulating on them.

Even the wind produced by the speed of vehicles can be used through small turbines located on the sides and median strips of the roads.

As you can see, there is a wide range of technologies that are being developed to ensure that our roads become self-sufficient energy generating systems. We could refer to them as “intelligent roads”.

In order to increase the safety of our roads, a set of initiatives are being tested and they will soon be implemented.

Removing the ice on the roads is one of the biggest challenges. One proposal in this regard is to use solar energy to get rid of the ice, thus making the roads safer.

Thermodynamic paint is probably one of the realities that we will soon see on the roads, consisting basically of creating new road markings that change colour based on temperature. That is, the road itself would warn drivers of any risks ahead by changing the colour of the road markings.

Besides everything explained above, there is the commitment of many car companies to fit their vehicles with new technologies that enable greater safety, efficiency and comfort.

Technologies that will radically change our consumption habits

Cloud computing, the future of the supply chain