Trending
NFTs, what are they? Discover its applications
Discovering the Metaverse potential
Physical Internet: Integrated technologies towards universal logistics.
Humanitarian logistics: At the heart of every emergency
Voice technology. Changes and keys in digital interaction.
The importance of cybersecurity as the backbone of...
Fog Computing for efficient and reliable digitization
Sustainability, Security and Technology: 3 key areas for...
Artificial Intelligence and Machine Learning in Manufacturing
Smart Tourism. Smart travel experiences
Home Logistic “One Belt, one Road”, the Chinese project that will be the central axis of world trade: an opportunity for Catalonia.
Logistic

“One Belt, one Road”, the Chinese project that will be the central axis of world trade: an opportunity for Catalonia.

The ambitious “one belt, one route” strategy, called the BRI (Belt and Road Initiative), was first exposed by Chinese supreme leader Xi Jinping in 2013, and since then it has been clearly and decisively marking all the Chinese government’s actions. Initially it was standard-bearer by the high authorities of the regime, but in the last months it is going down in a clear and pyramidal way to all the structures of the gigantic China.

The trade war with the United States is causing this project to accelerate and to become almost an obsession for all territorial management bodies of the People’s Republic of China. This territorial structure is made up of 32 local administrative entities: 22 provinces (23 if Taiwan is included), five autonomous regions, four municipalities under direct administration of the central government and two special administrative regions. 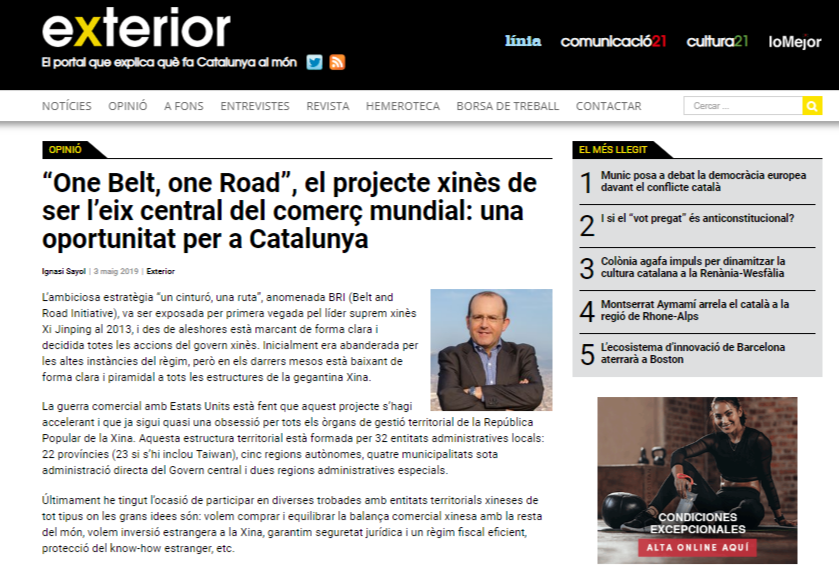 Original Catalan version click here to have a look at it

Lately I have had the opportunity to participate in several meetings with Chinese territorial entities of all kinds, where the big ideas are: we want to buy and balance the Chinese trade balance with the rest of the world, we want foreign investment in China, we guarantee legal security and a regime efficient tax, protection of foreign know-how, etc.

In summary, China has decided to replace the role of the United States as the axis of international trade. To this end, it has designed a strategy for the development of infrastructures and investments in 152 countries and international organizations in Europe, Asia, the Middle East, Latin America and Africa. They are already talk that the Belt and Road initiative may be one of the largest infrastructures and investment projects in history.

This gigantic project has many aspects that will affect us, but in this article I would like to analyse, above all, a very important part of it that constitutes what is called the railway silk route, that is the capacity to connect the immense China with Europe through the railroad. The sea silk route is already a reality, but in my opinion, also its terrestrial equivalent could be an important interest for our economy.

In fact, Italy has seen it clearly and has become the first developed economy to sign up for China’s global investment program, which, of course, has raised concerns among Italy’s Western allies who see how they can take a leading position in the land exchange of goods with China. Keep in mind that this transport, from a logistical point of view, is very efficient. For every 4 tons of goods traveling from China in Europe, only one ton does it in the opposite direction. It presents, then, a great opportunity to balance logistics flows with the Asian giant.

The Chinese economy’s growth model based so far on exports, industry and investment; opens a way to a new one, where services and domestic consumption will have an increasingly decisive role, within a constant increase on the population’s standard of living. With a middle and high class that does not stop growing, already has in domestic consumption the greatest lever of economic growth, this is where we can have a great opportunity. Do not forget that China is the second economy in the world, the first in purchasing power and has a population of almost 1,400 million inhabitants.

Catalonia has a great opportunity and should know how to take advantage of it. From my point of view, our agri-food sector should take a step forward and position itself

Given this scenario, I think that Catalonia has a great opportunity that it should know how to take advantage of it. From my point of view, our agri-food sector should take a step forward and position itself. The railway silk route lasts less than the sea one, we are talking between 14 to 16 days against 6 weeks of maritime transport.

This time decrease of each journey is not trivial, in addition of making the logistics chain more efficient, reducing stocks and serving the customer more quickly, it allows us to open the opportunity to send fresh products to the Asian giant, instead of frozen products that can lose quality and need an enormous energy expenditure to transport themselves.

There is cold technology capable of doing so and reducing the carbon footprint by 80% compared to other transport systems. This is another element to consider, environmental sustainability; the railway and the new generation cold containers allow to send fresh products over long distances with a very important reduction of the environmental impact.

This new market, surely, can allow to stop paying money to farmers to pull up trees and encourage them to plant more, since we can sell to a new market with very interesting prices, substituting the quantity for quality.

Finally, for this new silk route to be efficient, it is very important that all the pending investments that ensure our railway connection with Europe, the well-known Mediterranean corridor, are made once and for all. However, we are already capable of seizing this opportunity, with greater logistics complexity and a higher cost, but this route is now a reality. It is necessary that everyone, administrations, producers and logistic companies paddle in the same direction if we want to take advantage of this opportunity and not to be captured by others.