In the first place, it must be said that quantum computers are not a simple evolution of current computers, they are a completely disruptive technology, they have nothing to do with it. The current computers are based on the transistor as a base element and our ability to process with them is still increasing since it has been able to produce them each time with a smaller size. To this day, the minimum size of a transistor is 14 nm, to have an idea, this is 300 times smaller than a red blood cell. This capacity of miniaturization of basic components in microelectronics has a limit that we are approaching. The limits of physics establish that from certain sizes it is known that the quantum effects in the atoms of which these transistors are composed will make their operation unviable. 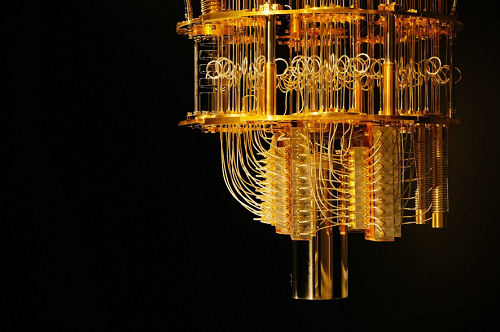 This is where the quantum computers appear, they are the answer to the limit of process capacity with which we will not find in a short time due to the limit of miniaturization.

A quantum computer is a computing device that makes use of quantum mechanical phenomena, such as superposition and entanglement. They can be used to represent and structure data, as well as to design and build quantum mechanisms to perform various operations with them.

This technology is so interesting for one simple reason: these phenomena generate a huge power of process, something never seen before. So it becomes a development with the possibility of revolutionizing the world of computing. Quantum machines promise to surpass even existing supercomputers and those that can be built in the future. In addition, its energy consumption is incredibly lower than that of current supercomputers.

This does not suppose the definitive supplanting of traditional computing. The classic computer will remain, in the medium term, the simplest and most economical solution to solve most problems. What quantum computers allow, given their great capacity for data management, is the possibility of promoting disruptive advances in various fields, from science, engineering, to pharmaceutical research.

The key: The qubits

Quibits are subatomic particles such as electrons and photons. These have the quantum properties of superposition and entanglement.

Both mechanical phenomena allow a connected group of qubits to provide an infinitely higher processing capacity than the same number of binary bits.

The properties of superposition and entanglement that are the basis of quantum physics, therefore, of quantum computers, are not intuitive, we simply can not understand them since they are behaviors that occur in the microscopic world, in the world of subatomic particles, do not occur in the nature we observe, go against our intuition or scientific thinking.

We should not worry if we do not understand them, we simply must accept that they exist, as the famous physicist Richard Feynman, Nobel Prize in Physics of 1965, said, “I think I can affirm, without fear of being wrong, that nobody understands Quantum Physics“.

The challenge: The management and generation of qubits.

To create a quantum computer, it is essential to keep an object in an overlapping state long enough to carry out the number of processes that are required.  Unfortunately, this is not always possible since it continually loses this state of superposition, which is known as decoherence, thus becoming a classic bit.

Different companies are addressing the challenge of decoherence from different angles, either to use more robust quantum processes or to find different ways to detect errors.

Companies like IBM, Google and Rigetti Computing, use superconducting circuits cooled to temperatures close to absolute zero (-273.15 ºC). Other companies, such as IonQ, trap individual atoms in electromagnetic fields on a silicon chip in ultrahigh-vacuum chambers. All these strategies with a common goal: isolate the qubits in a controlled quantum state.

In areas where today’s computers would require billions of years to solve some of the most complex problems in the world, quantum computers could find the solution in minutes, hours or days.

Here some surprising applications, which can be developed exponentially thanks to quantum computers:

Artificial Intelligence must be able to analyze large data sets of images, videos and texts. At this time there is no shortage of data, we could say that it is in an overabundance phase. Quantum computers would allow to analyze and manage more data in much less time, thanks to its power to process petabytes of data that have not yet been analyzed.

Each process can have a number of variables, with quantum computers a machine can be able to handle almost innumerable permutations and combinations, which could advance the design and analysis of systems in a massive way.

For the logistics sector, optimization is the common denominator of all transactions and processes. Classic computing is used to organize shipments, flotillas, real-time data management, etc., which in the long run can become too complicated processes for a classical solution, so a quantum approach will become a great alternative. We must think that the Physical Internet, which I have already spoken in another article, and that promises to be the definitive engine of the optimization of global logistics will need a large amount of process in real time to be operational. Quantum computing can be the definitive solution for its implementation.

Quantum computers will be able to create, simulate and model molecular structures. Already at Harvard University in 2012, a quantum computer, D-Wave One, was used to solve the way in which some proteins are folded.

The first commercial quantum computer the D-Wave 2000Q, has been implemented by D-Wave, a company backed by Goldman Sachs and Bezos Expeditions. It is a quantum system with 2,000 qubits and advanced functions controls.

The systems could be used for the elaboration of complex financial models and risk management within the financial industry. It could help find new ways to model financial data and isolate key global risk factors.

The chemical industry, for example, can work to identify a new catalyst for fertilizers that helps reduce greenhouse gas emissions and improve global food production. This requires modeling of very complex molecular interactions for classical computers, but suitable for quantum computers. There are many possibilities with significant impact, that this technology opens within the area of chemistry.

Quantum computing will help in the advancement of materials science, creating new alternatives and greener technologies. One potential application is the development of high temperature superconductors, which would allow the transmission of energy without losses. The new discoveries facilitated by quantum computers will help identify materials with properties suitable for superconductivity, a very complex process beyond the reach of ordinary computers.

It may take several years for quantum computers to reach their full potential. But if these machines deliver on their promises, they could transform entire industries and drive global innovation. Some companies, such as IBM and Google, say that we could be close, as they continue to group more qubits and build more precise devices.

Although it sounds long term and there are contradictory points of view, its development is possible; do not forget that a few years ago it seemed impossible for us to have cars without a driver, that mobile screens could bend or that artificial intelligence could come out of our cinema screens to invade the real world. The development of innovation is advancing rapidly, there are still barriers to cross, but time will tell.

The future with 5G technology, disruption in sight.

“One Belt, one Road”, the Chinese project that will be the central axis of world trade: an opportunity for Catalonia.