Trending
Digital transformation technologies for the agricultural sector
Sustainable Development Goals (SDG) in Logistics
Digital sovereignty: The need to control our digital...
NFTs, what are they? Discover its applications
Discovering the Metaverse potential
Physical Internet: Integrated technologies towards universal logistics.
Humanitarian logistics: At the heart of every emergency
Voice technology. Changes and keys in digital interaction.
The importance of cybersecurity as the backbone of...
Fog Computing for efficient and reliable digitization
Home Tecnología Tech cities of the future: 6 growing cities as tech communities
Tecnología

Tech cities of the future: 6 growing cities as tech communities

Cities have been preparing to enter a global digital transformation. The coordination of all the systems joins the commitment to develop a connected world that is useful to the community, through collaboration, innovation, and entrepreneurship. 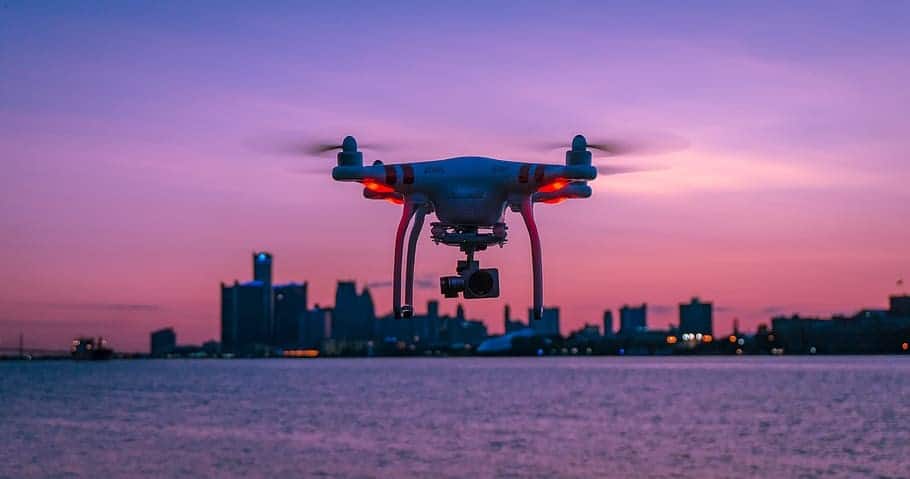 Silicon Valley, the paradigmatic example that opened the eyes of the world, has given way to the replication of technology clusters around the planet, as part of an initiative that is beneficial to national economies and leaves its mark on the international level.

Europe seeks to be a benchmark for innovation and technology, generating Tech Cities that work on innovation focused on people and sustainability.

The initiatives of different European countries are promising, but it is necessary to prevail and excel in the technological race for the creation of ecosystems that are developed through government support, financing, and infrastructure policies.

Each city or technology group has its history and appeal, all under a common goal: to support successful technology companies and that initiatives see the light of day. A city that is committed to technology obtains great benefits in its local and national economy, and international projection. They create jobs, attract investment and talent; as well as energize social and cultural ecosystems.

The fDi Intelligence division of the Financial Times offers the world’s most thorough services related to foreign direct investments. Every year it conducts a study of “European Cities and Regions of the Future” where it collects data in 505 locations: 319 cities, 148 regions, and 38 local business associations. These data are divided into 5 categories: economic potential, human capital and lifestyle, profitability, connectivity, and openness to business development (Business Friendliness).

This year, despite the instability of Brexit, London takes first place, followed by Paris, Dublin, and Munich. Madrid ranks at the 11th place, while Barcelona the 19th. Bucharest, at 22nd place, embodies the trend towards the attractiveness of eastern countries for technological development and commitment. 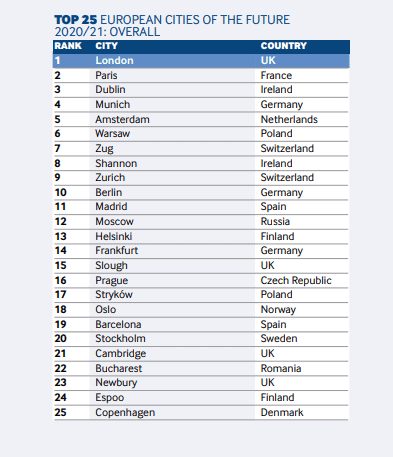 London has proven to be unbeatable among all European cities. The combination of capital, talent, and infrastructure makes it the city with the most promising prospects for new companies’ creation and investment in technology and innovation.

Between 2003 and 2019 the city has registered more than 5,000 software patents, more than 100 in Artificial Intelligence, making it a European technological leader.

According to research compiled by London & Partners, London welcomed more European and non-EU tech professionals than any other major European city in 2018. Additionally, data from Stack Overflow, an online community for developers, showed that London is home to more software developers than any other European city, with more than 357,900 employees.

In addition to the startup bet, the capital of the United Kingdom is home to eight of the 500 best universities in the world, where more than 57% of young people between the ages of 25 and 64 have attained tertiary education, which also categorizes it as the best city in Human Capital and Lifestyle. It also leads the category of Connectivity with main cities, with six international airports within an area of ​​80 km that directly serve a total of 357 international destinations. Finally, it is considered the most “Business Friendly” city since a company can be created in only 5 days.

Paris, the Research and Development Centre

The second position is the city of Paris. The French capital attracted 50 internal software research and development projects between 2015 and 2019. It was also well positioned in the Business-Friendly category, as investors can start a business in four days. Also owns 10 of the top 500 universities in the world in computer science and engineering.

Starting in 2017, French President Emmanuel Macron unveiled several initiatives aimed at turning France into a “newly created nation.” This includes a fund of 10 billion euros to promote innovation throughout the country and support entrepreneurs. Paris is home to the world’s largest startup campus, Station F, which features more than 60 incubators and accelerators, hundreds of co-working spaces, and 30 digital fabrication workshops.

Between 2009 and 2018, more than 11,000 patents were registered in the city, consolidating Paris as one of the most innovative cities in Europe and awarding it for the best important city for its economic potential. Besides, it ranks third in the Human Capital and Lifestyle category.

Dublin and its economic potential

Dublin shines with great potential having the highest level of capital investment in software R&D of any European city. It is recognized as a thriving tech community for its talented and supportive business system. The city has received between 2014 and 2019, 543 investments, where a third were in commercial services, a quarter in sales, marketing, and support functions. It is the favourite city for expansion and co-location projects.

The official venue of the world’s main technological events, the Mobile World Congress and Smart City Expo. Barcelona and Catalunya are considered a technological ecosystem’s global leading destination. The Startup Catalunya initiative, a set of public policies that promote technology transfer and entrepreneurship, has supported the development of an ecosystem of more than 1,500 startups, including the Glovo delivery application.

The infrastructure is a strong point, including science parks, nine universities, and the 22@ innovation district. This last is a district of urban, technological, social, and economic innovation, where highly innovative companies, innovation centres, and universities coexist with housing, public services, and green areas. This provides great appeal for international tech companies.

In Catalonia, according to 2019 data, there are 1,369 foreign technology companies, 21% more than in 2018; dedicating itself to the fields of ICT, industry 4.0, biotechnology, electronics, health, Smart Cities, digital and audio-visual content, mobile, video games and R&D. With innovation hubs from companies such as Gas Natural, Seat Metropolis Lab, mVentures MWC, Visa, Samsung, among others.

In this sense, two important events have occurred in recent years:

– Firstly, at the European level, the so-called KICs (Knowledge and Innovation Communities) https://eit.europa.eu/tags/kics  have been selected. Barcelona was the only KIC zone selected in Southern Europe. Specifically, oversees the developing innovations centered on urban mobility in the European Union. Large public-private projects, with an investment of 400 million euros in Europe, which act as attractors for startups, small and medium-sized companies, and multinationals. To implement it, the MOBILus consortium was created, made up of 48 cities from 15 countries, 12 companies (such as Seat), and 18 universities (such as the Polytechnic University of Catalonia -UPC-).

– Secondly, Catalonia has been selected as one of the 5G corridor testing locations. The Mediterranean 5G corridor will be applied in the border section between Figueres (Girona) and Perpignan (France). Only three projects have been selected at a European level: the Catalan-Occitan candidate, the Baltic project, and the Benelux project. This project is promoted by a consortium led by Cellnex formed by 21 entities, companies, and technology centres from Catalonia, Spain, and France, which involves the development of a cross-border corridor to carry out tests with autonomous and connected vehicles.

Bucharest has been named one of the Top 10 European Tech Cities of the Future for 2020/21, according to fDi and TNW. The Romanian capital is ranked number 7, making it the highest-scoring city in Central and Eastern Europe.

Amsterdam, one of the world’s most important technological cities of the future

In the Netherlands, the government has worked hard to negotiate favourable trade agreements with nations around the world, to make attractive cities like Amsterdam, Rotterdam, or Eindhoven. “StartupAmsterdam” was born from the collaboration between the city of Amsterdam and the private sector, which came together to design an initiative focused on helping companies grow in a suitable environment. Today, several international tech companies like Netflix, Uber, and Tesla have chosen Amsterdam as their European headquarters.

Amsterdam has established itself as a major player on the international tech scene, there are now over 2,200 tech companies employing around 77,000 people, which is 14% of the city’s workforce. The Dutch city is a hyper-connected hub for emerging technology and innovation, where startups are raising millions of funding and setting trends.

Betting on technological development is a great option to consolidate the brand of cities, making them attractive for tourism, investors, and international workers. Being part of the movement attracts attention, literally “puts the city on the map”. The benefits are obvious, but it also brings certain challenges. What is certain is that a Tech City does not emerge by itself, it is the result of urban planning and government interaction. Currently, betting on innovation and promoting the development of ecosystems that promote creativity, technology, and innovation development is one of the clearest lines to generate a sustainable, promising, and attractive future.