Trending
Digital transformation technologies for the agricultural sector
Sustainable Development Goals (SDG) in Logistics
Digital sovereignty: The need to control our digital...
NFTs, what are they? Discover its applications
Discovering the Metaverse potential
Physical Internet: Integrated technologies towards universal logistics.
Humanitarian logistics: At the heart of every emergency
Voice technology. Changes and keys in digital interaction.
The importance of cybersecurity as the backbone of...
Fog Computing for efficient and reliable digitization
Home Tecnología Graphene: The material of the future
TecnologíaUncategorizedUncategorized

Graphene: The material of the future 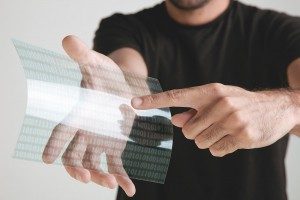 Graphene promises to revolutionize the field of technology and especially the mobile sector, but its impact will be seen in many other industries. In fact, the versatility of graphene is considered in terms of the different presentation forms and approaches of each manufacturer for its industrial application.

Beyond the many possibilities in the production of smart phone screens, this material has potential applications in devices such as brain-embedded chips that allow detecting epileptic seizures in real time; or ink that, once used in the printing, will allow us to interact with other devices.

This reality is bound to be the very near future. But some of this technology is already underway. This is the case of flexible screens, made possible thanks to graphene, and which experts estimate will be on the market in about three years.

It is a carbon-based material. It is so thin that it is considered only two dimensional, and it is one of the most flexible, lightweight (five times lighter than aluminium) and resistant materials out there (200 times stronger than steel), in addition to its high conductivity of heat and electricity. It is a relatively inexpensive material. Therefore, it has all the features to become a key material for building many of the elements that we know, and others we don’t, at a lower cost, with a lower environmental impact and a higher performance.

Surprisingly, it is not a new material, since its structure was described eight decades ago. However, it was not isolated until 2004 by researchers Andre Geim and Konstantin Novoselov, which led them to be awarded with the Nobel Prize for Physics in 2010.

One of the firms participating in this year’s Mobile World Congress in Barcelona (MWC ‘16) was Zap Go, a start-up that develops graphene batteries and chargers that will charge mobile devices in just five minutes.

Maybe one of the most surprising and unexpected… In just a few years it will allow us to wear our mobile on our wrist.

The company Novalia presented a poster with audio at the MWC’16. The poster showed the image of a battery printed in graphene ink and, when touched with the fingers, the different parts of the instrument powered some speakers that reproduced the sounds.

Graphene chargers have an impact on the automotive sector as well. The field of Aeronautics has also discovered a material that is especially interesting for the industry for its lightness; or even the health sector. As mentioned above, this material can be embedded under the skin or clothing to detect and monitor processes and reactions in our body, such as vital signs, and it is even intended to help recover speech or vision.

The possibilities of such material are almost endless. Some of them were revealed at the MWC ‘16; many others are still to be unveiled or discovered…

A long way to go

Despite its many features, the huge expectations and the fact that it is already being used in the manufacturing process of various devices and technologies, there is still a long way to go.

Mass production of graphene is perhaps one of the barriers to overcome. Companies like IBM or Samsung are focusing much of its efforts in the research of mass production of graphene using methods that yield a very high quality material that can be used in high-tech. Researchers predict products and devices made from graphene will be on the market in about three years, but the commercialization and widespread use might take a little longer.

No doubt graphene is here to stay. And companies will try to make the most of its many properties to dominate the market, if possible, before making them public.

The evolution of electronic commerce in the near future